On this post I will talk about a tool that is OS independent. You can share a Mac or Windows or Linux desktop and that allows remote collaboration with multiple people looking and controlling the same desktop. 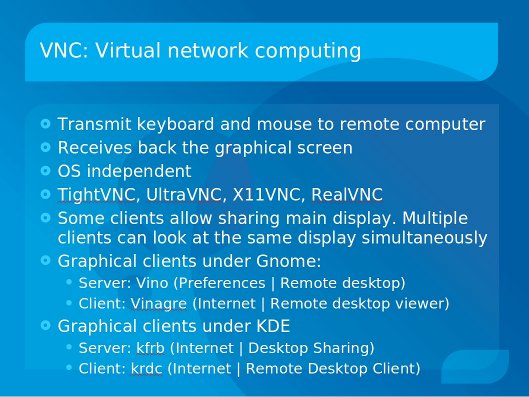 VNC uses the RFB protocol to transmit keyboard and mouse signals to remote computer and receive back the graphical screen.

On the client side
vncviewer hostaddress:0

Of course you can open additional sessions. This is useful when you want to have multiple people working on the same computer on different sessions.
x11vnc -display :1

Sometimes (usually due to port blocking) you need to have the client waiting for the server to open the connection.

You do this by modifying the ~/.vnc/xstartup script.

SSH to the remote computer opening the VNC listening port

Once connected execute the command on the remote console
sudo x11vnc -display :0

On the local computer open a different console

There you can enable it and set other connection parameters

Other Places to Find Us

These are the most active social presences. Others are listed on the community page.